Be sure to check out our → List of Writing Competitions!
Almond Press / Guest Post / Dystopia in the Body

Dystopia in the Body

I grew up watching Star Trek, The Original Series. I would stay up until midnight to watch it in the darkness of my bedroom when everyone else was asleep. In many ways it greatly influenced my writing, demonstrating to me the power of science fiction. One of the things I found fascinating was their interpretation of the future of medicine. Medical care was done by rectangular gadgets that made buzzing noises or beeped and had readouts (which we couldn’t see), but revealed to Dr. McCoy exactly what was happening in the body of the patient. Cures came in the form of hypos that shot medicine through the skin without the need of a piercing needle. There were rare instances of surgery, and that was just as clean, antiseptic and invisible. There was no blood, and extraordinary things could occur, such as reattaching Spock’s brain.

Years later, when I was writing a dystopian science fiction play, I revisited these forms of “hands off” and “antiseptic” medical procedures and took them to, what I felt, were their logical conclusions.

In my play, medicine of the future would be dominated by technology, to the extent that medics (individuals who functioned as a hospital, ambulance and doctor all in one) had no authority to touch a patient. The machines were the only allowable, legal contact.

This technologically miraculous medicine would be available only to the upper classes. With the rise of advanced technology came with it a rise in cost: these nearly-guaranteed cures would be expensive and not affordable to everyone.

Those who lived “Uptown” were the rich and could afford medical technology. Those “Downtown” had to resort to traditional medicine. And what was traditional? Surgery with scalpels and circular saws, injections, psychotherapy, meditation, herbs, teas, and mercury and arsenic to cure syphilis. It was hands on-to the extreme: not only were patients touched by doctors and alchemists, but often there were friendships and sexual attachment. There would be theaters to watch an autopsy, all staged in a dramatic love story. The doctor was in the role of seducer, beseeching the corpse the intimate connection of an autopsy.

This technology may be perfect, but patients aren’t. There are diseases that enter a stage called “Phoenix”. This occurs when a common disease, such as kidney stones, becomes cured technologically and then spontaneously reoccurs. The recurrence is much stronger, the disease becoming more aggressive. Every subsequent curing and recurrence gets worse, until a patient dies from a usually non-fatal disease. At this point, the only cures available that work can only be obtained Downtown, using traditional medicine.

This is the core of the dystopian element in this society: those who have access to superior, hands off medical care find that their bodies rebel. They must have interaction with a doctor or therapist. They require medicines that are intrusive, painful, often times poisonous. They must undergo indignities, live in fear, conduct rituals and chant, and, most importantly, suffer.

Technology has destroyed the intimate, nurturing element of the doctor-patient relationship. Losing this is like losing a mother. Not only do people suffer from loneliness and discontent, they lack expression. They have no one to talk to, have someone tell them all will be well. There is nothing more isolating than being chronically ill and being completely alone.

The body has turned upon the patient: in some deep recess of the mind, genetic manipulation occurs and these cured diseases re-enter the scene. The diseases become like a crying child, demanding to be helped, coddled and fed. Ignored, the body reacts stronger: the body becomes the wrecked, nightmarish dystopian landscape that the patient must navigate and learn to survive.

It is only through violence, being operated on without anesthetic or enduring the devastation of a major amputation, does the patient recover. This isn’t unlike the end of any action movie: what brings about the climax and resolution of the plot is an enormous scene of massive destruction and death where the antagonists are destroyed and rendered impotent, while the protagonists achieve their goals, remove the threat and begin the settling of the universe. But the protagonists don’t necessarily experience this without the loss of life, getting wounded and great destruction of property. The world is set aright, but not without cost and suffering. Suffering is something that seems to be a requirement of a cure. I argue that the body needs suffering during an illness as part of the healing process. To remove that with technology, to create painless and sterile cures only denies the body and the mind a truly human and ugly journey. 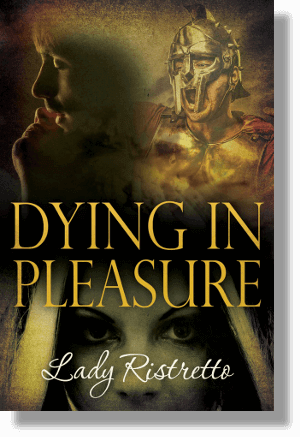 The intertwining narratives of each character, drawn together by love, sex or something bigger are marvelous and the author weaves them together expertly.
Isabelle Arden

Sign up for “Lady Ristretto’s Cummings and Goings,” newsletter