Be sure to check out our → List of Writing Competitions!
Almond Press / Book Review / Featherbones by Thomas Brown | Book Review

“He tells her that he trusts her and she throws herself around him, enveloping him in feathers and bones.”

Felix gets up, goes to work, spends his weekends drinking and dancing with his friend/ work colleague, Michael and repeats. After a traumatic childhood experience Felix is left with a dispassion for life. However his affinity for the sea is what sees him through his day-to-day routines. Featherbones is a story of childhood, guilt, grievances and sexuality. The narrative invites an array of avian metaphors, the biggest of which is revealed to Felix towards the end of the novel. 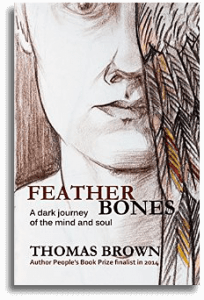 Felix’s biggest demons are his subconscious feelings. He looks back on aspects of his childhood; meeting Harriet and her horrific death by drowning, his counselling sessions with his father’s friend and the constant feeling of being different. He’s haunted by dreams of his school days and as a result his mental health is unstable. One point in the novel that struck me, were his two attempts to drop his phone from his balcony. To me this symbolises two particularly low moments in Felix’s life and is almost a metaphor for his own suicide; as if watching his phone drop to its demise will solidify his need to let go.

Discussion about Felix’s lack of interest in women is a common subject between him and Michael. It is not entirely prevalent in the novel until he sleeps with Angela. His regret in having done so is a powerful moment at which point his grasp on reality drops and his connection to Michael takes on a new level. It isn’t until Felix visits his hometown and leaves Southampton for the first time since graduation that he starts to let go of his past. The catharsis of being told his nightmares were normal is a moment of unparalleled freedom. The uncertainty of Felix’s sexuality towards the end of the novel is quashed and comes as somewhat of a surprise – it did for me anyway.

The lack of a female role model in Felix’s life is often commented on, only by Felix or his father and Felix blames himself for the death of his mother. He was born in the middle of a storm, “born in the rain”, and as a result it prevented his mother from reaching the hospital. This discovery starting point of trying to unpick why Felix is so convinced he is “different” to others. Again I am not sure if this is a subtle indication of his sexual uncertainty, but I believe that this trauma and his relationship with his father are definitely contributing factors for Felix’s self-deprecating nature. 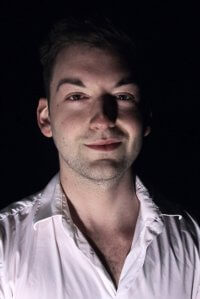 Felix’s obsession with the sea and birds prevent him from moving forward. Brown’s use of language to contextualise all of the metaphors he incorporates shows that he can command words with elegance and effortlessness. At times this caused the novel to slow and I felt that the narrative became overly descriptive. Brown is able to cleverly meld the real and surreal into a realm that lands somewhere in between. He captures an altered level of consciousness that allows him to take daydreaming to a – using the Burkean definition – sublime level.

Overall Featherbones was new experience of reading for me. The use of magical and terrifying imagery combined with the monotony of everyday life was cleverly executed and a brilliant piece of literary fiction by Brown. 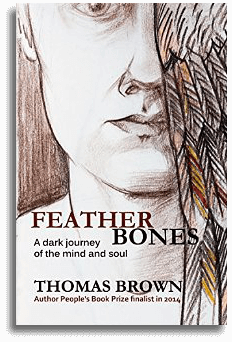 “Featherbones is an ethereal love song to a city by the sea. Thomas Brown’s beautiful novel depicts a liminal world of statues, drownings and winged creatures. It’s also a real page turner. I love this book.”
Rebecca Smith, author of The Bluebird Café