Be sure to check out our → List of Writing Competitions!
Almond Press / Guest Post / Using Scene Cards to Eliminate Struggling with a Blank Page

Using Scene Cards to Eliminate Struggling with a Blank Page


One of the worst feelings for any writer is staring at a blank page, yet it’s a task I found myself doing more often than I would have liked, especially the first page of every new chapter. My problem wasn’t lack of ideas, or motivation. My problem was I didn’t use a detailed outline. I did have an outline. Sort of. Somewhere, lost in a pile of notes you’ll find a loose sheet of paper with one or two words for each chapter (well . . . at least ten chapters) and a story are sketched out on the other side of the paper, usually accompanied by coffee stains. Because that works for me.

All writers fall into two categories, either you’re an outline writer or an organic writer. I’ve also seen them called plotters and pants writers, and George R.R. Martin refers to them as architects and gardeners. Discussing the pros and cons of both might take all day, but in short, an outline writer plans their stories, with meticulous detail, while an organic writer plops their characters on a blank page and allows the story to develop freely. An outline writer rarely keeps the page of any chapter or scene empty for long.

I’m an organic writer though, which means I end up staring at a lot of blank pages. I might know what big event needs to happen in the scene, but the details are floating around in the air waiting for me to pull them out. And that’s not necessarily a bad thing. My characters love the potential in that emptiness. Sometimes they love it so much, they have a hard time moving. I’ve spent many mornings writing the first couple paragraphs of a scene, only to delete them and start all over again. Twenty times in a row.

Thankfully by the time I had finished my third novel draft, I found a system that worked for me. One that allowed me to think about and plot scene details, while still giving the story the freedom to develop naturally.

I began using scene cards. Now when I start a new scene, I spend 15 minutes brainstorming before I write the first word. I start with major events that could happen. Let’s say I know this is the scene where Carla and Daniel meet, or try to, but I still haven’t planned how it all happens. I’m not an outline writer so these are usually nothing more than fragments and it might look something like this:

I do all of my brainstorming sessions longhand. While I’m considering the possibilities, other ideas pop up, and then after those ideas come and go, the juicy stuff shows up. Take the above examples. Carla running over Daniel, the idea with the most tension, was the fourth idea. I almost never go with first or second ideas. But the original ideas grow and eventually I end up with the framework for a scene that includes two or three specific things I want to happen. From there, I’ll sketch out some details that are going to come in handy.

And I finish with a few in-depth questions like:

Sometimes, I don’t fill in all the blanks. Sometimes, I do. My purpose isn’t to plot out all the details, it’s to give me a starting point.

I used Excel to create my card template, because it was easy to work with. You can do the same, or search the internet and find an existing template to use as a reference. Then add areas that are important for you: description of characters, internal conflict, weather, weapon specs, injuries. I don’t use all of those categories, but you might need them, so add them. The key is not to get too bogged down with details, add only what you need.

Because I’m an organic writer, almost every scene turns out differently from the one I originally sketched. Before moving on to the next scene, I make it a point to jot down the new details and save the scene cards for my revision. Once the manuscript is complete, I set it aside for a few weeks until it’s ready to read through with a fresh set of eyes. While reading, I flip the scene cards over, and make notes on the back to address during the revision process.

These cards guide me, but they don’t stifle me. Because the structure is loose, my characters are free to roam and do unexpected things. As an organic writer, two of the most important elements of my stories are the depth and authenticity of any character. Using scene cards gives me a push at the beginning of scenes to get my pen moving, but by not forcing all the details, they allow the characters the flexibility to tell their own story, even if it means deviating from the first plan. In other words, I use the scene cards as a springboard, nothing more.

If you find yourself constantly staring at the first page of a chapter and hitting the backspace button more than anything else, try using scene cards. I’m happy to report those empty pages that once dominated my mornings don’t overwhelm me anymore. Most of the time. 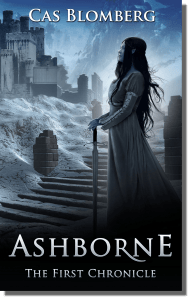 An ambitious undertaking by a debut author, but one that she manages to pull off. And It’s also refreshing that it’s not a teenage coming of age fantasy.
Amazon

Cas Blomberg
Author at casblomberg.com
Cas Blomberg lives in Stockholm and writes speculative fiction. Her debut fantasy novel, Ashborne: The First Chronicle, is available at all e-book retailers. The sequel is scheduled for publication in 2015.